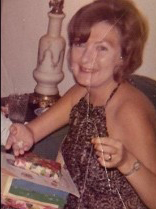 On November 2, 1978 at approximately 10:00pm, thirty-six year old Leigh Ann Wilson left her Jefferson City, MO apartment to go to a nearby gas station. Ms. Wilson was seen at the gas station alone in her vehicle, however, she never returned home. Around 11:30pm a witness reported seeing a grey 1970’s vehicle, possibly a Pontiac, parked along the median with its flashers activated on U.S. Highway 63 south of Highway 163. The witness saw on the roadside a white male with dark hair and average build hitting the victim. The next morning the victim’s body was located in a grassy area on South Hardwick Lane, just north of a roadside park near Ashland, MO. The victim’s vehicle was later located in the parking lot of a grocery store in Jefferson City, Missouri. A medical examiner ruled the death a homicide.

Anyone with information is urged to contact the Boone County Sheriff’s Department Detective Unit at 573-875-1111 or CrimeStoppers at 573-875-TIPS.